Have you ever witnessed or participated in a food fight? Whether one is referring to a fun food fight (like the scene in the movie Hook), or to a contentious battle over food in politics and business, all too often a food fight leaves a great big mess.[1] Hopefully, the upcoming conference titled “Food Fight—A Civil Dialogue over Our Daily Bread” will help clean up a few messes in our thinking and practices regarding the quality, cost, preparation, distribution, and place of food in our lives. This conference hosted by The Institute for the Theology of Culture: New Wine, New Wineskins is scheduled for April 18th at Multnomah University in Portland, Oregon. We will be making more information available in the days and weeks ahead.

I mentioned above conference themes such as the quality, cost, preparation, distribution, and the place of food in our lives. What do these various menu items entail? Questions regarding quality remind me of the documentary Supersize Me. According to the film, the constant consumption of fast food can quickly lead one to the edge of the grave. The risks associated with vast consumption of fast food are especially disconcerting for those of lower-income means. The article “Why Low-Income and Food Insecure People are Vulnerable to Overweight and Obesity” notes: “Low-income communities have greater availability of fast food restaurants, especially near schools (Fleischhacker et al., 2011; Larson et al., 2009; Simon et al., 2008). These restaurants serve many energy-dense, nutrient-poor foods at relatively low prices. Fast food consumption is associated with a diet high in calories and low in nutrients, and frequent consumption may lead to weight gain (Bowman & Vinyard, 2004; Pereira et al., 2005).”[2] The absence of grocery stores and farmers’ markets along with reduced access to reliable transportation, green spaces and recreational centers exacerbate the situation in many poor communities.[3] 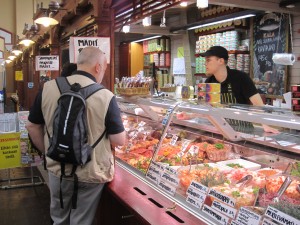 In places like ‘Portlandia’ where I work, we often raise important questions about the environment in which the food we eat is produced, including livestock, chickens and the like (the hyperbolic clip “Is the chicken local?” from the show Portlandia humorously conveys this concern). Another question arises in this context: Is the treatment of animals raised for food humane? Some wonder if preoccupation with these kinds of questions is largely urbane; that is, they argue that such consideration of the environment and the treatment of animals is the preoccupation of the urbane or cultural elite (See for example the op-ed, “The Organic Fable”); however, might it not also be the case that the cultural elite are the ones who are at times making the charge (See for example the article, “Is Local Organic Food Elitist?”)?

In the midst of the debate over elitism, we must make sure not to lose focus on local, grass roots concerns. In this context, one might ask: whether or not food is fast or slow-cooked, or whether it is grown locally or far away, do all the locals have access to food that can truly sustain them, or does distribution favor the well-to-do? Do they/we do too well to the detriment of others? Is there not enough good food to go around, or does the fear of scarcity cause some of us to horde good food rather than share it in view of God’s abundant care?[4] After all, God wants us to look to him for our daily bread, as “The Lord’s Prayer” conveys (Mathew 6:11).

Bread, rice and related items are staple foods for people’s daily lives. But how do staple foods shape our interaction and various forms of transactions? Bread and related staple foods often staple people together. Just think of the Lord Jesus, who broke bread (why not Doritos?) with his disciples at the Last Supper in order to bind them fast to him in view of the Marriage Supper of the Lamb (Luke 22:14-18). One of my Micronesian friends informed me just yesterday that all significant transactions in his society involve food—trust and food go hand in hand.[5] Would the same be true for you and me?

At the upcoming conference, “Food Fight—A Civil Dialogue over Our Daily Bread,” we will take time to sit down and chew over these and other substantial ideas together. The table of open, trustworthy discussion will be set. We hope you will join us.

[1]Whether or not one considers the political discourse over GMOs a big mess, it has certainly become an increasingly debated topic in American politics at a variety of levels. See the following links concerning Measure 92 in Oregon, which focused on whether or not to require labeling and bans of genetically modified organisms (GMOs):

One of the related issues the conference will need to address is how the call for greater (or lesser) regulation and awareness regarding what we produce and consume bears on small farms. See for example the following links:

[2]The same report documents the following: “Low-income neighborhoods frequently lack full-service grocery stores and farmers’ markets where residents can buy a variety of fruits, vegetables, whole grains, and low-fat dairy products (Beaulac et al., 2009; Larson et al., 2009).  Instead, residents – especially those without reliable transportation – may be limited to shopping at small neighborhood convenience and corner stores, where fresh produce and low-fat items are limited, if available at all. One of the most comprehensive reviews of U.S. studies examining neighborhood disparities in food access found that neighborhood residents with better access to supermarkets and limited access to convenience stores tend to have healthier diets and reduced risk for obesity (Larson et al., 2009).”

[3]It is worth drawing attention to the Pacific Northwest fast food chain Burgerville, which promotes itself as a healthy alternative. See its discussion of “Our Food” at the Burgerville website.

[4]See Walter Brueggeman’s article, “The Liturgy of Abundance, The Myth of Scarcity,” for a biblical-theological reflection that bears on this theme.

[5]Just think how staggering it must be in my friend’s Micronesian context to consider Judas betraying Jesus soon after leaving the table: “‘But behold, the hand of him who betrays me is with me on the table. For the Son of Man goes as it has been determined, but woe to that man by whom he is betrayed!’ And they began to question one another, which of them it could be who was going to do this.” (Luke 22:21-23; ESV).